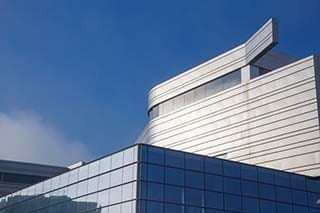 As companies and architects embrace the long-term benefits of sustainable construction and developing technology, more energy efficient buildings are being constructed to diminish the carbon footprint and significantly reduce energy and water consumption. The US Green Building Council is issuing a growing number of LEED (Leadership in Energy and Environmental Design) certifications, a sign that building designs are moving toward more sustainability in construction. The trend is not only in the United States as new construction in the rest of the world is following a similar path.

Whether new construction or retrofitted buildings, hundreds of projects stand out as shining examples of eco-friendly creativity in design and implementation. Below are three examples of buildings that exemplify this objective.

The Wayne L. Morse U.S. Courthouse was the first new federal courthouse to achieve LEED Gold certification. Built with energy-saving, environmentally positive features, the courthouse in Eugene is a six story, 266,000 square foot building containing six courtrooms, library, court services, judges’ chambers and other offices including ones for the two Oregon Senators and the US Representative from the district. Considerable attention in design was paid to facilitating public access and security.

Elements such as waterless urinals, low-flow toilets and drought-tolerant plants for landscaping are a few of the features that have reduced the water consumption by 40% compared to similar building usage. Completed in 2006, builders employed a high percentage of durable recycled content in the construction material sourced from the surrounding area. Strategies included the use of various types of glass and strategically located courtyards to maximize natural light. The Courthouse was designed to require less ongoing maintenance. The paints and adhesives used for construction were low-VOC  materials which are safer by allowing minimal chemical emissions.

Situated in the center of the Idaho capital city in Idaho, the Banner Bank Building has been designated a LEED-certified building for its use of sustainable energy sources. Like the nearby Idaho Capitol Building in the center of the city, the Banner Building benefits from the presence of an abundant geothermal energy source that bubbles beneath ground level. In addition, the Banner Building has a water reclamation system and backup generators that run on vegetable oil, a biodiesel source of energy. The water and energy usage reductions in total compared to conventional buildings are estimated to be 80% and 65%, respectively.

Employees of the Banner Bank building are encouraged to use public transportation, carpool or bike to work. Secure bike stalls and showers are provided for the ecology-minded employees.

The Willsboro Public Library is an inspirational example of what can be done with abandoned structures. Rather than bulldozing a structure, businesses, civic leaders and urban planners are finding creative ways to convert vacant eyesores into energy efficient and functional buildings.

Prior to becoming the new Willingboro Public Library in 2006, the structure was an abandoned strip mall for which the only future would have been demolition. Using 100% of the existing steel and framework, the planners and construction companies converted the sprawling structure into a well-lit and attractive library. The center of the conversion was once the foundation of a long-gone Woolworth store. The designers opened apertures in the walls and roof to provide ample natural light for the library and reduce energy consumption. Funnel-shaped skylights are aligned for maximum daylight.

The Willingboro Public Library was awarded the American Institute of Architects 2007 COTE Award for being one of the Top Ten Green Projects in the country.

Do you have any other fascinating green building examples to add to the list above? Share your thoughts below in the comments!