4 Reasons Why Asphalt & Concrete Are Unsustainable 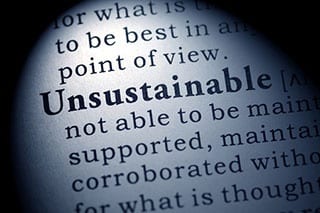 Many of those roads have been repaved several times over their lifespan. Most roads are composed of either concrete or asphalt. The National Asphalt Pavement Association takes credit for 94% of the 2.6 million miles of paved roads, not to mention the pavement used for parking lots, bike trails, driveways, and outdoor sports surfaces.

Concrete is popular for many multilane superhighways as well as sidewalks and other surfaces.

The problem with both of these materials is that they’re not sustainable. Producing asphalt and concrete are resource-intensive processes and the production and application of these materials release harmful emissions into the atmosphere and play a significant role in polluting the Earth’s water supply.

Why Are Asphalt and Concrete Unsustainable?

Petroleum, the workhorse in asphalt, is either drilled or fracked from beneath the Earth’s surface. Petroleum is a finite resource, and if roads are to accommodate the ever-expanding world population, we must develop alternative methods of paving. Second, the process of extracting oil or concrete components from their natural locations is an environmentally disruptive process. According to a Forbes article, scientists are citing petroleum fracking as a principal cause of new earthquakes in Oklahoma and other areas.

Drilling oil, extracting concrete components, and converting these into asphalt and concrete require tremendous amounts of energy. While there has been significant progress in recycling used asphalt and reusing it—thanks to the development of products such as recycled asphalt pavement (RAP) and recycled concrete aggregate (RCA)— recycled products continue to be mixed with virgin material to achieve the performance characteristics required for roadways.

Once pavement is laid, the soil beneath it no longer experiences natural moisture. Roads and parking lots require complex drainage systems to channel rainwater and melted snow. Rather than filtering through the rock and soil into clean flowing streams and rivers, the water, contaminated by the pavement and debris, flows underground to mix with municipal sewage systems before being dumped into the rivers. Long-term continuation from this unnatural cycle can become a serious threat to the water supply.

Volatile Organic Compounds (VOCs) threaten the atmosphere and diminish air quality by emitting dangerous chemical gases into the atmosphere. As a petroleum-based product, the production and application of asphalt is a major culprit in the deterioration of the environment. Similarly, the high-energy process for producing cement, the key component of concrete, emits high levels of VOCs. Paints that are typically used for striping roads, parking lots, and bikeways are also petroleum-based. These emit elevated levels of harmful VOCs during application and curing, contributing to the unsustainable characteristics of asphalt and concrete paving. An alternative for striping paved areas is a soy-based, durable marking paint from BioStripe®. This low-VOC material works as well as the traditional paints—but without the hazards. Some universities and municipal parks have tested this material, and are finding it to be an outstanding long-term solution.

Concrete and asphalt will continue to be depended on for roadways until better solutions are developed. In the meantime, innovations in porous asphalt and concrete, plus onsite asphalt recycling, have become reasonable alternatives to how we build and repair our highways today.

What does your organization do to make your paved structures more sustainable? We’d love to hear your thoughts in the comments below!