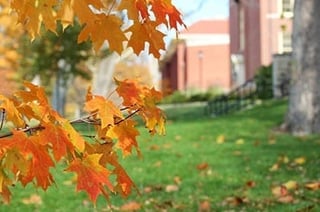 Many of the breakthroughs in sustainability have originated on college campuses. As a microcosm of the larger community, students and faculty have initiated programs, conducted experiments and set high objectives for improving water, energy and soil conservation while instituting aggressive recycling and composting programs. Private companies have funded many of these scholarly initiatives to gather data to support sustainability programs on a commercial or broader level.

Thinking Outside the Dorm

CSU was the first large university to earn Platinum status in the STARS program, a sustainability rating system. Home of the first solar-powered heating and air conditioning system for a campus building, Colorado State is in the forefront of sustainability among universities. While earning any of several eco-oriented degrees, students also interface with NASA to monitor global change progression through a radar-managed cloud monitoring system.

In collaboration with the oat experts at Quaker, U of I students have created a biomass program that produces a renewable energy supply consisting of oat hulls and other grasses.

Biomass energy produced from crops creates a sustainable energy cycle. Burned in to produce steam and electricity for campus use, biomass products release carbon dioxide into the atmosphere. Growing crops absorb carbon dioxide through photosynthesis. The crops are then harvested to again create a biomass energy source that is used for energy and the cycle starts again.

Always rated high in sustainability, Oregon State has found a way to harness human energy. By connecting exercise machines like treadmills and stair climbers to the electrical grid, energy generated by human exercise produces supplemental power for university facilities. This and other clean energy measures have reduced OSU’s energy costs.

Ohio State has implemented low-VOC (Volatile Organic Compound) marking paints for their parking lot striping. This soy-based paint from BioStripe® does not emit the harmful gas into the atmosphere as the traditional petroleum carbon-based paints. In addition, the University has successfully executed Zero-Waste programs at football games attended by 105,000 fans. Each scrap of material is recycled or composted for other uses and nothing ends up in the landfill.

Setting the highest goals for sustainability is important to Stanford students. The current program, Stanford Energy Systems Innovation Program, is focused on reducing potable water usage by 15%, carbon emissions by 68%, and a waste diversion rate of 75%. Already an estimated 47% of the food served at Stanford is organic or locally sourced while at least 65% of solid waste is composted or recycled.

College of the Atlantic

For those interested in attending a college or university where sustainability is a focused priority, the College of the Atlantic in Bar Harbor ME is an option. This school was the first to be carbon neutral in 2007. COA has advanced projects in other phases of sustainability such as land management and conservation, organic agriculture, historic preservation and elimination of toxins in foods and other consumable materials. Organic foods are the staple at every meal as the students are encouraged to join in and support earth-friendly projects.

In the final analysis, thanks to the efforts of university students and faculty, the population of the United States and other countries is becoming more aware of the ecological challenges of creating a sustainable environment. The current generation and the next will have more discipline in purchasing and using only sustainable products. Companies hear the message and improvements are becoming apparent in the products at groceries hardware and department stores today.

What sustainability initiatives has your campus implemented? Share your knowledge in the comments!